Careful transcribing and research is slowly bringing the underlying truth to the surface as it would from the tip of the archaeologist's trowel. The process is a fascinating one, so much is there to be found if only you know enough of where it hides. On this journey you meet fellow time travelers, those investing large tracts of their lives rustling through the often priceless detritus left for us to find with a sharp eye and analytical mind.

Flying has always been a huge adventure for pilots, never more than in its early years where danger lay at the surface facing them every day.  Crashes, whilst often survivable due to low mass and the frangibility of the machines, were very frequent. Protection for the pilot was minimal and entanglement in cartwheeling wreckage often involved hideous injuries. The attrition rate among those learning to fly from those who could barely manage the feat themselves was grievous.
As flying training establishments flowered across the United Kingdom and far into the Empire, the casualty rates rocketed. At the end of hostilities it was estimated that we had lost more young men to accidents and training than we had to the conflict.

The figure commonly bandied about is around 14,000+ total flight crew casualties, some 8000 or more to non combat losses. These numbers have been disputed having appeared in one biography and cited without confirmation. Another more scholarly figure puts the losses during training 1914-1918 at nerer 2000, still appaling by any measure but considerbly fewer than the former [looking for the reference].


During 1916 Major Robert Smith-Barry found this situation intolerable. This eccentric, deeply intelligent aviator decided to do something about it. Had he failed to convince the GOC RFC Hugh Trenchard that there was a better, more considered way to conduct flying training, it is likely that we would have lost many, many more before the truth and a better way dawned. Smith Barry transformed flying training into a relatively safe process by schooling instructors in his personally evolved techniques, he made it possible to turn callow youths without a clue into aviators whilst keeping the vast majority alive. Like many of his compatriots Arthur Keen returned from the Front to Home Establishment (the UK) to recuperate from the stress and fatigue of combat. During the interval at home it was normal for returnees to be used as flying instructors to bring along their replacements. Until the sweeping changes brought about by Smith Barry were introduced, tutoring the 'Huns' (as they called them) was a dangerous and low status job. One often loathed by exhausted young men who, having survived the tumult over France and Belgium, felt ill inclined to be sent to their maker by those resembling themselves months earlier.
In this light it's hardly surprising that instruction was often very poor. Students typically spent little time actually handling the flying controls before staggering into the air themselves for the first time in grossly underpowered aircraft of pitiful performance and dubious handling characteristics. Where these aircraft still exist either in original or replica form they are generally flown by the very well qualified (often test pilots) to ensure their continued existence and keep insurance rates tolerable. 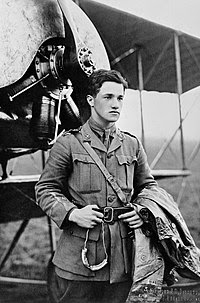 Captain Albert Ball presents us with a fine example here of the flowering, emergent aviator. He completed his service training on the 29th January 1916 and was immediately posted to Gosport arriving on 31st of that month. He took up duties as a flying instructor with 22 Squadron and wrote in a letter home on the 6th February "... thirty officers up for instruction, and out of thirty, six off solo..." and all in a single day (Bowyer, 1977. p.49). This was quick work indeed even for the time, we would love to know how many survived the experience.
Ball scribbled a short note home on the 17th February prior to embarking for France. In the early years of the RFC, if you were a 'brevetted' pilot you knew how to fly and could therefore (of course) teach others to do the same.

A large part of Arthur's story is entwined in the drama surrounding flying training. It is clear from the material that he was a talented pilot, what also emerges is the picture of the committed instructor. Someone who graduated from Smith-Barry's earlier Gosport instructor courses with 'a final assessment exceeding all who had gone before' (a statement taken from one of his letters that we hope to establish evidence for one day). What he might have done post conflict with that talent will never be known but he was spotted by those structuring the new Royal Air Force and given attractive options, one that he took, the rest he left behind to return to 40 Squadron at Bruay/Bryass, this time as its commanding officer.